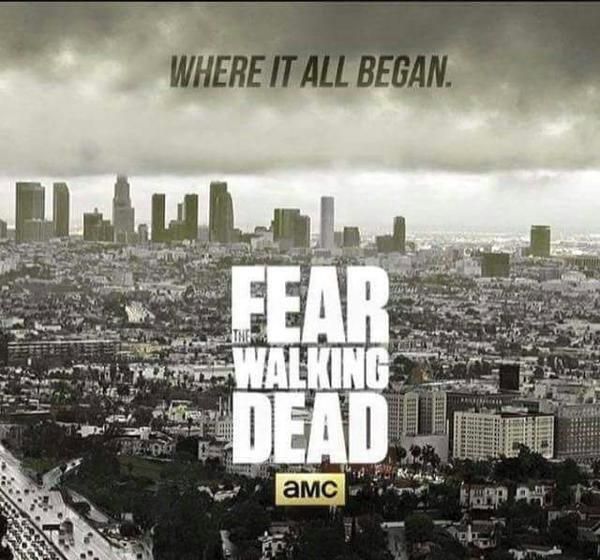 What do you do when you have a wildly successful tv show on your hands?
A niche show, that made horror mainstream?
A show focusing not on the horror aspect, but relationships, character development and drama?

Easy: you create a spin-off.

That’s exactly what Robert Kirkman decided to do, after his comic-turned-tv-marvel (pun intended) reached new heights of popularity. And since August 24, we were all treated to the first few episodes of Fear the Walking Dead.

And therein lies the problem.

If you have a soaring success on your hands, why divide your time, energy and creativity in two? Why not focus on that amazing success you’ve managed to build, to make it even bigger and better? Why start from scratch with something new (but not exactly unique), without even knowing if it’s going to pan out?

Is it for the fans? Is it because, by expanding the universe you’ve created, you add to its lore? Is it pure and simple greed, either the network’s or your own, that made you want to delve deeper into a story that’s perfectly fine as it is?

At this point I guess a couple of disclaimers are required: yes, I am a huge The Walking Dead fan. I will not join on the TWD-hate even if/when an episode is deemed sub-par. I will not bow down to the faux-superiority of critics who often accuse the show of repetition, of deeply flawed characters, of bad decision making that only leads to death, disaster, heartbreak, tension, or (more often than not), all of the above.

Secondly, with the TWD Season 6 premiere only a few weeks away, I am in no position to assume it’s not going to be as powerful as its previous seasons. I don’t know if working on the Fear the Walking Dead has subtracted from its original iteration. Hopefully it hasn’t. Hopefully it’s as intense, emotional, occasionally savage as the Season 5 finale. Hell, hopefully they’ve even turned things up a notch. The producers always insist that the show reinvents itself every 8 episodes, so who’s to say that’s not exactly what’s going to happen this season? I, for one, am keeping my fingers crossed that all my hopes are realized, and then some. I want my favorite show to be great, because I want to keep watching with the same anticipation week after week. It’s really as simple as that.

I guess it’s not that simple for other people. Fans who love the Kirkman-verse and want to see more of it. Fans who are more intrigued by the post-apocalyptic world the show inhabits and less by the characters and their plights. Fans who are just more into wonderfully, artistically perfect zombies – excuse me, Walkers – than the humans they threat, terrorize and occasionally bite.

For those fans, AMC introduced Fear the Walking Dead a few weeks ago. Five episodes in, I can’t help but wonder if those fans are actually satisfied by the new show. I know I’m not.

I tried, I really tried. I’m not a quitter. I’m one of those people who’ll finish a book even if it bores me. I’ll watch a whole season of a show I’ve begun even when it’s a wildly disappointing one, because I feel like I’ve committed to it.

So I watched the pilot. To be more specific, I tried watching it twice before I actually managed to finish the whole episode. Not a good start.

Pilots are meant to be what grips you. The thing that latches on and offers both visual and emotional arousal, enough to make you want to watch. You don’t need to have action-packed scenes and huge character development and drama and ethical dilemmas and stunning scenes all at the same time. 40 or 50 minutes of television are not enough for all that, if your main goal is to introduce the premise and the protagonists.

But you do need to have at least one of the above, especially when the premise is more or less known to your key audience. And that’s where the pilot failed me.

We already know the premise. Whereas TWD begins well into the apocalypse and follows a group of people whose lives before the outbreak we glimpse through flashbacks, Fear the Walking Dead starts at the very beginning, on the opposite coast of the US. It’s been made clear by the marketing department of AMC, by all the previews and trailers, by everyone involved in the show promoting it through social media. Us, the fans of TWD, were the ones planting our butts in front of the TV in late August to watch FTWD, and we knew exactly what to expect.

Did we get it? Well, yes and no. We did in fact get a new show about the beginning of the apocalypse. In L.A., with new characters, a new setting, a lot more alive people and fewer walking dead ones. But that’s really as far as it went for me.

I didn’t need to know the painful details of the protagonists’ dysfunctional family life from the get-go. I wanted to see these people face the doom thrust upon them – and, with clever writing, as with the TWD, all those flaws and tensions would have surfaced pretty soon.

Hearing that the writers intended for this show to be more drama-oriented (as in, a family drama set in a post-apocalyptic world) didn’t do much in the way of explaining the pilot either. I loved watching the relationships unfold in TWD because, with all his flaws, Rick is a pretty likable guy. I used to hate-watch Lori and Carl and had a love/hate relationship with Shane, and it all worked, because it was compelling television.

Five episodes in, I don’t even recall the FTWD main characters’ names. It’s not that they’re unlikable, it’s that I’m indifferent to them, and that’s even worse. I don’t care what happens to them. I don’t actively hate, or even dislike them. I don’t want them to die, I don’t even want the army guys (clearly the villains in the latest episodes) to die.

I just don’t give two flying f**ks what happens to them, so I don’t think I’ll keep on watching.

8 thoughts on “Fear the Spin Offs”