Another week, another location for the Top Chef contestants. This time they’re off to cook in Palm Springs – or, as Jason puts it, the Gay Mecca: lots of gays, lots of old people, apparently. I’m really taking a liking to Jason – his discomfort at being surrounded by the macho-group of chefs in the hot tub was adorable.

Their quickfire challenge takes place in the desert, and it’s exactly what I had expected (and dreaded) since this season’s preview of multiple locations was: makeshift kitchens set up in unconventional locations making it harder for the chefs to produce a decent dish.

This time it’s not just the heat and the scorching sun, but their cooking equipment as well. Padma shows up with José Andrés, who’s going to be the guest judge in this episode, and they come bearing… gifts? Well, not exactly: the contestants must cook using solar powered stovetops and ovens. They have to draw knifes to determine which chef gets to use which of the two available cooking methods, and off they go.

Some actually embrace the challenge and are excited about the alternative energy cooking method, like Carl, Isaac and Wesley, while others whine and end up breaking (!) their oven *cough*Giselle*cough*. Naturally, the ones who went into the quickfire with a good mood end up producing nicer dishes. Although I’m not too thrilled about the idea of sub-par dishes due to less-than-ideal cooking circumstances, these kind of challenges show a lot about the chefs’ personalities, so even though they don’t result in michelin-star-quality dishes, they’re still interesting (and entertaining) to watch. 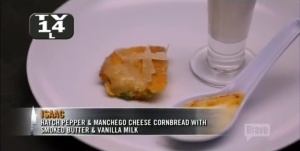 Isaac’s hatch pepper and manchego cheese cornbread with smoked butter and vanilla milk was good, and he had every right to brag about making cornbread in the weird cylindrical oven in under 30′.

Jeremy prepared a seared halibut dish on the stove, with pickled mushroom and habanero-tomato vinaigrette, which Chef Andrés, also enjoyed. 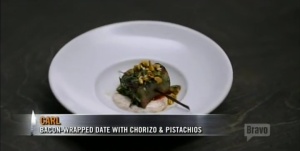 Carl’s bacon-wrapped date with chorizo and pistachios was a winning combination of salty & sweet and hit a home run with José Andrés, as it happens to be his mother’s favorite flavor combo.

Grayson had trouble with her oven throughout the challenge, as she couldn’t manage to get enough heat on her skirt steak. Padma’s snarky “Did you not hear when José said to angle the oven towards the sun” was a bit bitchier than was called for in this instance, but judging from the way the steak looked, I can’t fault her for ragging on the slow-talker too much. Her skirt steak with fresh tomato salsa and goat cheese definitely didn’t impress anyone. (Also, again with the meat and tomato sauce? Does this girl know how to cook nothing else?) 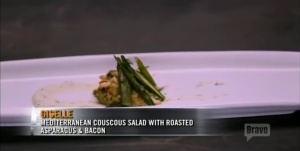 Giselle’s oven mishap resulted in barely a tablespoon of mediterranean couscous salad with roasted asparagus and bacon on the plate, and by the judges’ reaction I guess it’s safe to say it tasted as bad as it looked. It’s a wonder she even got something on the plate, really.

Jason’s insalata russa with scallops, bacon and potatoes scored points with José because of the red onion. 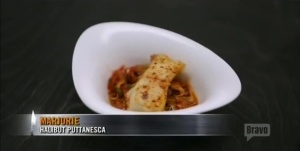 Marjorie’s halibut puttanesca apparently looked like veracruz sauce, and I’m not sure if that’s a good or a bad thing, but she used to work for Andrés so that might just land her squarely in the middle of the pack. 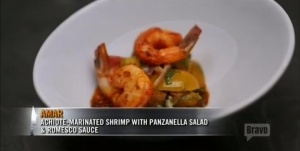 Amar’s achiote-marinated shrimp with panzanella salad and romesco sauce didn’t get much feedback but the chef was clearly pumped about working with the solar oven so he’s definitely a winner in my book. 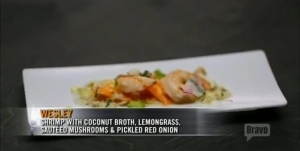 Wesley’s shrimp with coconut broth, lemongrass, sautéed mushroom and picked red onions was a hit in terms of flavor and texture, and he was super excited to work with the oven and hoped to get to use it again sometime. He even took some time to clean up his bench because he didn’t want to be called out for being messy again. I’m loving Wesley by now. 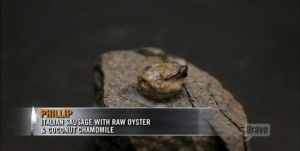 Phillip’s oyster dish (with italian sausage and coconut camomile) didn’t go down so well with the judges, and no one can blame them, really. His idea to ‘plate on part of the desert’ by using a rock is definitely original but serving a raw oyster under the blistering sun? Not a good idea. Padma must have been very cranky on that day. After her snarky remark to Grayson, she scrunched up her face and called Phillip’s dish ‘snot on a rock’. Ouch.

Time to pick the top and bottom dishes, starting with the least successful: Grayson’s steak was dry, Giselle’s was bad, and Padma just had to chime in and declare Phillip’s her absolute least favorite.

On the winners’ side, Jeremy impressed with his simplicity and elegance, Wesley’s dish combined sweetness with acidity expertly and Isaac’s cornbread rish paid off. Out of the three, Wesley’s enthusiasm won the day, and not only received immunity but also a donation to a charity on his behalf, and a solar stove! Go Wesley!

For their elimination challenge, the chefs would have to prepare a progressive four-course meal and serve their dishes right on the golf course where the judges will be teeing off.

The chefs are split down the middle based on which solar device they used, and at first glance, they’re slightly uneven; as Isaac points out, a lot of the people on his team have been on the bottom while many of the chefs on the other team have had a winning streak.

If Isaac is concerned, Grayson is not. When they plan out their menu and start pairing up, Giselle makes it clear that she doesn’t want to work with Angelina, who called her a bitch for beating her twice in the last episode. I can’t really blame her. Angelina isn’t crazy about working with Giselle either, so Grayson decides to step up. She doesn’t mind that Angelina has been on the bottom, and warning bells start going off but hey, all the more power to her for giving the younger chef the benefit of the doubt.

Team Orange decides on a latin themed menu (which Grayson isn’t comfortable with, but Angelina feels confident she can carry the team) and Team Blue goes for a vegetable-driven menu. In the end, both teams’ dishes are pretty similar, which makes judging all the more easier.

Despite the unusual conditions, none of the chefs seem to have too much trouble preparing their dish, except for Isaac and Phillip, who both decided to tackle dessert for their teams solo. The wind made maintaining a flame and even serving the dish a bit awkward, especially in the case of Phillip, who had a lot to prove as this was his pastry chef wife’s recipe, so he covered his entire station with a tablecloth and started plating the judges’ dishes hidden underneath. It was nowhere near as hilarious as they seemed to think it was, and if this was the “weirdest experience” Padma’s ever had, girl needs to get a life.

When it was time for the judges to taste the dishes, there were a few stand-outs and a few letdown, as is usually the case.

Jeremy and Karen’s ceviche was a clear favorite (and also the first dish they tasted), and Jeremy impressed the judges with his ice-water bath idea to keep his fish ice cold, which Kwame and Chad neglected to do with their own raw fish dish. It baffles me that this was such a wow-factor for the dish, as it seems like common sense to keep a cold dish cool with ice, but the judges loved it, and Kwame and Chad failed to think of this simple trick.

Jason and Marjorie’s shrimp dish definitely had the edge over Grayson and Angelina’s, especially since both teams of judges commented on the overmarinated, rubbery shrimp and the overcooked corn, which they all would have preferred raw.

Giselle and Amar’s steak dish was a bit disjointed, whereas the judges loved Wesley and Carl’s steak with grapes. When they pointed out that they grapes would have been better fresh, Wesley did what Grayson failed to do with her own dish, and adjusted his garnish before the next team of judges had the chance to taste his dish.

Lastly, dessert: when Phillip reached for the rum and limes, Isaac decided to go a different way and chose tequila and grapefruit. The judges enjoyed his sabayon, although they would have liked a more pronounced grapefruit flavor, but definitely enjoyed it more than Phillip’s coconut custard, which had a weird consistency.

The judges didn’t need to deliberate too long before deciding on a winning team, as Team Blue was the clear winner.

Out of all the dishes, the one that impressed them the most was the first one they tried, and praised Jeremy for his ice-bath idea once again. He’s become one of my favorites so as much as I find their reaction to his serving method exaggerated, I’m all for him winning this challenge!

On to the losers side, and one dish was clearly the worst of the bunch. Angelina lands on the bottom once again, along with Grayson, who’s clearly pissed and makes sure the judges know she really liked the dish she served. Tom points out that it was fatty avocado on top of fatty chorizo with very little acidity to counteract the fat, not to mention the awful corn.

In the end, the judges decided that the overcooked corn and not Angelina’s shrimp was the biggest sin on that plate, and I’m a bit on the fence about this decision. In the past, it was almost always the protein, and not the garnish, that got the chef kicked out, so by that logic, Angelina should have been the one to go. Then again, as Grayson herself pointed out in her angry exit interview, she’s the seasoned chef. If she thought this would make her eligible to continue on, the judges clearly thought differently: she’s older and more experienced, therefore she should know better.

Even the fact that she admitted, during cooking, that she’s “never made chorizo hash” before, like it’s some exotic method that made her uneasy, would have been enough to get her booted off the show, to be honest. She completely ignored the judges’ comment about using raw corn and just served the dish as it was anyway, so not only was she uncomfortable cooking a very simple plate of food, but also stubborn enough not to heed good advice.

Buh-bye, Grayson. I don’t much like Angelina, but I can’t say I’m sorry to see you go.