Teen shows are the worst. Which really makes them the best. 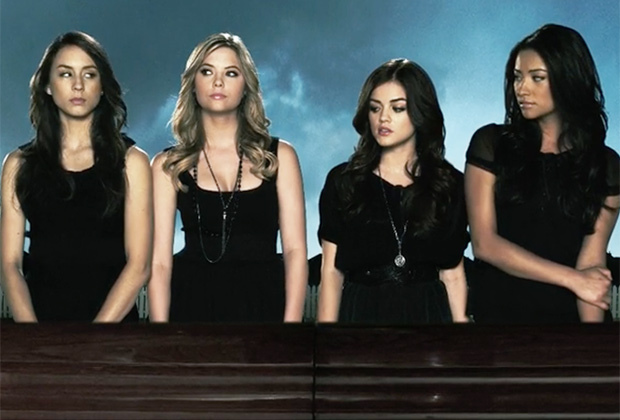 In my never-ending quest to find new (at least to me), interesting and fun TV material, I recently came to a conundrum: I wanted something light and frivolous, yet complex enough that it would keep me guessing. Nothing too heavy or horrific, but peppered with mystery and clues that begged to be deciphered. Something over-the-top and unrealistic, with beautiful people and quirky outfits and snappy dialogue that I could watch while, say, engaging in house chores, but substantial enough to not just use as background noise. A show counting plenty of past seasons to provide entertainment for a few weeks without becoming tedious.

I’m not sure exactly what I was looking for, but I definitely found just the thing in the most unlikely candidate: Pretty Little Liars.

I know, you’re shaking your head and going tsk tsk and judging me as you’re reading this. But hear me out.

This show is the most ridiculous, eye-roll inducing, riddled with plot holes TV program I have ever watched. Its plot is convoluted just for the sake of providing ample confusion, it’s cheesy enough to make you gag, the inconsistencies will make you want to scream and it’s so removed from reality that it makes the Gossip Girl cast look like boring teenagers. It’s on ABC FAMILY, for f*ck’s sake.

And yet I just can’t stop watching.

It’s a classic case of “it’s so bad it’s good“, and one of the things that make watching PLL such an enjoyable experience is the fact that, as much as I’m almost hate-watching it, I’m having too much fun to actually hate on it. Which means it’s entertaining. Ergo, not boring. Which is basically my only criterion coming into this thing in the first place.

There’s not much that’s not ridiculously outrageous about the show, including the main plot: Alison, a teenage girl disappears in the small suburban town of Rosewood, PA. When her body is discovered a year later, her four best friends try to solve the mystery, while a person calling themselves “A” is constantly making their lives a living hell and threatening to expose their secrets. The fact that most of these secrets are a direct result of “A” fucking with them (therefore the girls are basically enabling their tormentor) is yet another glaring plot hole, but just roll with it.

The whole mystery-solving angle is problematic in and of itself, because as the plot progresses we find out that Alison was pretty much the quintessential Mean Girl, which means everyone is this stupid town is obviously much better off without her in the first place.

The four Liars – Hanna, Spencer, Aria and Emily – are all imbeciles, even smarty-pants Spencer, who can randomly recite encyclopedia entries for just about anything the other three are clueless about, her repertoire ranging from history to ballistics and pretty much everything under the sun except, apparently, Portuguese.

This “A” person, on the other hand, is this omnipresent, omniscient entity that cruelly tortures the girls while they are unable to not only stop “A”, but even figure out how not to screw up the simplest tasks.

More frustratingly, these girls possess the memory of a goldfish; the only consistent piece of the storyline is that in each and every episode they repeat the exact same mistake that got them into trouble the previous week; from entering an ominous claustrophobic space without ensuring a way out to talking about their “closely” guarded secrets in the middle of a crowded room without even trying to keep it down, it’s not so much that “A” is an evil genius, but that the girls are just handing “A” all the ammunition (s)he needs in order to outsmart them on a silver platter.

Other frustrating inconsistencies include: random characters appearing to complicate things and then conveniently disappear for seasons at a time, introducing new plot points indicated as important only to be dropped in subsequent episodes, etc. The number of lies and secrets pile up so high that even the most attentive viewer couldn’t possibly keep track of everything that’s been going on more than 3 episodes deep.

It’s like the PG version of Gossip Girl with sub-par banter, minus the interesting character arcs, plus a murder mystery. Much like the big reveal about (spoiler alert!) Dan being GG probably prompted a lot of faithful viewers to watch the whole thing again and spot inconsistencies, I bet half the stuff that this “A” knows and does would be impossible to trace back to whoever is the designated “A” character and his/her accomplices each season. But who cares, really?

Meanwhile, despite the fact that we’re dealing with serious issues, not only is running to the authorities always the last resort (if it even crosses the Liars’ minds at all), but also there is such a minimal presence of authority figures – and when they do appear, it’s only as plot devices – that it’s obvious that the Liars’ school and homes only serve as set pieces, where no one does any real parenting and/or teaching unless it’s somehow useful to advance the plot. Nor is attendance apparently a requirement at Rosewood High. Chief among the useless adults, aside from most of the parents (with the possible exception of Emily’s, but they only appear in a handful of episodes to begin with), is Ezra Fitz, their english teacher-slash-Aria’s-on-and-off-boyfriend, who may or may not be a sociopath, but is definitely a pervy pedophile.

Normally everything I just mentioned would make me write this show off as utterly idiotic, but I can’t help but feel like it’s the most ridiculous and the most awesome teen show on television.
I’m working my way through season 4 at the moment, and so far my random thoughts on some of the (many, many, many) attributes and plot devices of this beautiful mess can only possibly be illustrated in the style of the patented point-reward method established in the sorely missed NYMag GG recaps.

[I’m trying not to give away too much here, not that spoilers really matter on PPL]

– they keep precious pieces of evidence in the most obvious places – their lockers, their bags, their closets. -2 points, because of course they do.
– they always start out as a foursome and split up when they’re in the most danger. -4 points, because HELLO?
– they walk into the same traps while “A” is always at least 2 steps ahead of them. -2 points for lack of consistency, because we remember what happened to them in previous episodes better than they do.
– Every time they uncover a piece of evidence, instead of focusing on that, they get distracted by other, minor clues and run with those. – a whopping 15 points because GAAAH.
– Even after all they’ve been through, they still keep way too many secrets from each other for too long (which lands them in even more trouble). -2 points for wonky priorities.

Final tally: if not for Spencer, PLL would barely land on the plus side. However, I did just award all the points to Mona and Jake’s torso, so ladies and gentlemen, we have a winner.

Seriously though, it’s one of the most entertaining shows I’ve seen so far, and will definitely keep watching (i.e. expect new points awarded/subtracted as I plow through the remaining seasons).

2 thoughts on “Teen shows are the worst. Which really makes them the best.”