Friend Request (aka Unfriend, not to be confused with Unfriended) 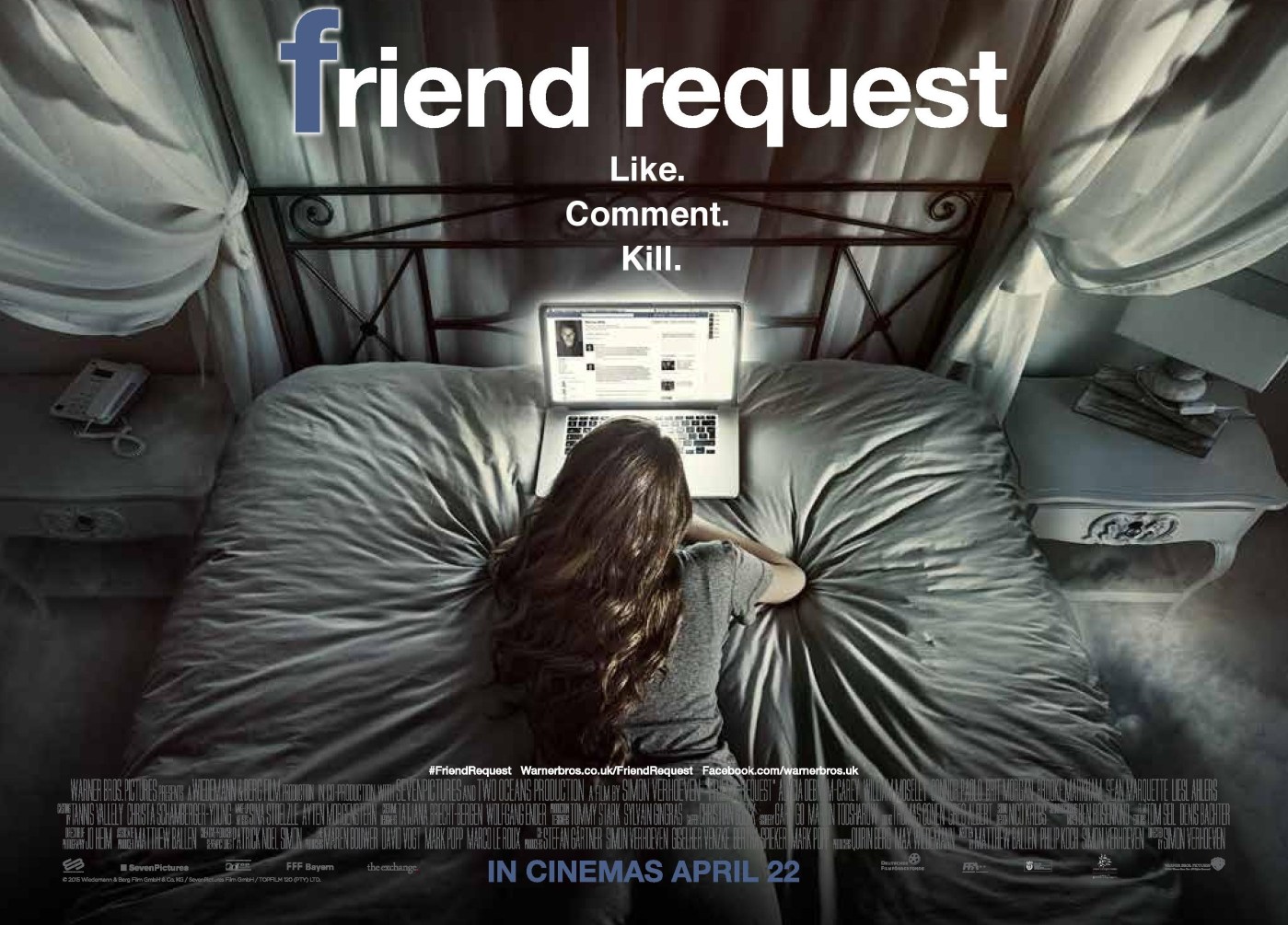 I should have learned my lesson with Unfriended (aka Cybernatural – what is it with the multiple titles for these movies?), but I guess I just couldn’t help myself. Although, come to think of it, a side-by-side comparison would have been interesting.

Anyway, this is more of the same tried and tested recipe: bullied girl cliché, check; popular girl gets punished by her shunned classmate, check; her friends start dropping dead one by one, check.

But let’s take it from the top: Laura is a cute, smart, popular girl in college who accepts a friend request from a weird outsider named Marina, who has exactly zero friends on Facebook. Her profile page is full of artsy black & white artwork that ranges from the bizarre to the downright nasty. Laura takes pity on the girl and reluctantly befriends her, but when she doesn’t invite Marina to her intimate birthday dinner, she incurs the girl’s wrath.

And of course that’s where the trouble begins. First, Marina commits suicide, which is oddly taken at face value even though there’s no body to be found, and the video footage of the gory death, which is a combination of slitting her own throat and setting herself on fire, is posted on Laura’s FB page. As Laura’s friends are killed off – or, more accurately, driven to suicide (I have to admit Unfriended was more creative in that regard) – her own popularity drops, because after each horrible death, new footage pops up on her FB page.

Naturally she tries to unfriend Marina and then delete her profile, but some ‘error’ occurs every time she tries, and not even her requisite hacker friend Kobe can figure it out. We get a bizarre matrix sequence of cascading hieroglyphics on the screen, which is like no code the guy’s ever seen, but seeing as he’s got a huge crush on Laura, he keeps trying to help despite being friendzoned.

As their numbers are dwindling and everyone is predictably scared shitless by what’s going on, the remaining friends (and Laura’s boyfriend Tyler) start looking into Marina’s mysterious past to uncover clues. The ritualistic manner of her death apparently points Kobe towards the occult, where he makes the connection between Marina’s artwork and the use of black wasps in black magic and some type of ritual called scrying, involving a black mirror. [or something of the sort – I kinda spaced out through that whole mumbo-jumbo].

I’ll try to keep this spoiler-free and just say that I enjoyed the little twist towards the end with Kobe, Laura and Tyler – it wasn’t too predictable and it was nice to see little Eric Van Der Woodsen play something completely different for a change.

Aside from the abundance of genre cliches, it wasn’t as bad as I expected. It was quite scary at times, although I do feel all these movies (and TV shows) need to let up with the pitch-black scenes where it’s virtually impossible to discern what the hell is going on.

The evil presence, which is ‘demonic’, if we’re to believe the movie summaries floating around, but ‘magic’, if we’re to accept what’s happening in the movie, is not your usual spirit causing jump scares, which was refreshing.

The black mirror/dark laptop screen connection was cool, if a bit of a stretch, and swarms of wasps are scary enough even when they’re not possessed by some kind of black magic power, so props for that one too. Also, I don’t know if this was intentional, but the scene where Laura is off in the corner, back turned to the camera, facing the mirror was a cool little nod to Blair Witch Project.

Oh, and extra points for actually having a mom around and involved in the plot for a change.

On the other hand, I can’t help but nit-pick a little bit when it comes to glaring plot holes; for one thing, did no one think to contact Facebook HQ to get their profiles taken down? Or were we meant to assume that this “demonic presence” doesn’t just override IP addresses and normal code but basically has free reign over all internet activity?

For another, who takes time to surf the web on their phone for clues right after getting stabbed AND chased by someone who wants to killed them? You hide and, if you get reception, you call 911, not scroll through old news items to figure out the mystery! Oh well, if you’re gonna make someone run after getting stabbed in the gut, I guess a little internet break isn’t that big of a stretch, but still.

The ending was somewhat predictable, if not an all-out cliche, but still a cool way to bring things around full circle. If the entire movie was meant as a cautionary tale, I think it missed the mark; unlike the lead in ‘Unfriended’, Laura was popular but not a mean girl nor having done anything to deserve what happened to her and those around her, which makes it even more terrifying than the usual ‘you get what’s coming to you’ angle. All in all, not a bad 90′ of creepy-scary sequences and just the right amount of absurdity to classify it as a perfectly acceptable silly horror flick.